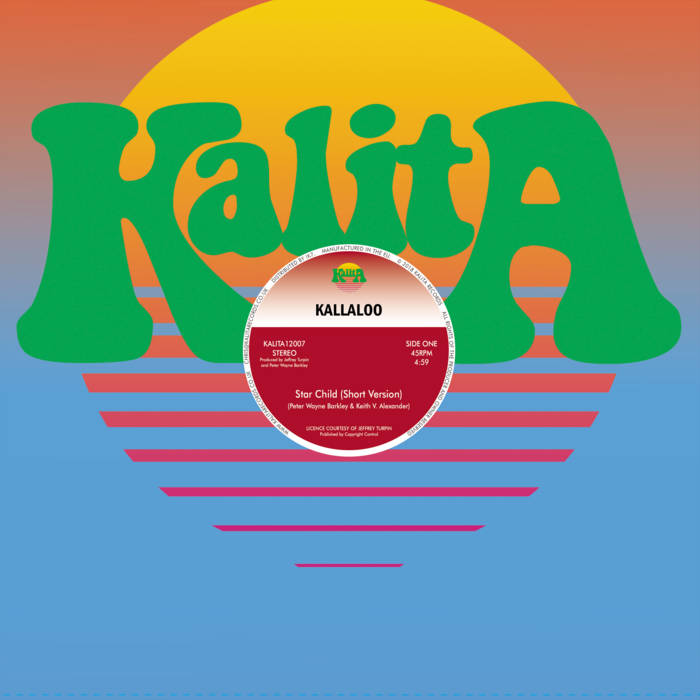 Kalita Records are proud and honoured to announce the first ever and official reissue of Kallaloo's sought-after 1982 disco single 'Star Child', accompanied by interview-based liner notes. Originally released on Jeffrey Turpin's Trinidadian record label IDA, 'Star Child' has since become highly sought-after by both DJs and collectors alike as an invisible, yet astonishing piece of Caribbean disco. Unable at the time to gain the traction and success that it deserved, we hope that this re-release provides an opportunity to bring such a great record to a much wider audience.

Kallaloo consisted of various Trinidadian musicians including Keith Alexander and Peter Wayne Barkley. Keith had been well-respected as a member of the Trinidadian group Impact, and was later to become an in-demand producer and composer under the name of Keith Diamond, responsible for various hits by Billy Ocean, Donna Summer, Starpoint and Melba Moore. In contrast, Peter was a well-known recording session drummer, but after 'Star Child's' release he moved to North Carolina to pursue other interests and “was never heard from again”.

'Star Child' was recorded at Right Track Recording, in mid-town Manhattan, New York. As Jeffrey recalls, the atmosphere in the studio was “great”, with “everyone upbeat, the cream of the crop just looking for that break... everyone was talented and just wanted the chance to express their own ideas”. Five hundred copies of the record were released on IDA with a white label design, and they were sold both in Brooklyn, New York and Port of Spain, Trinidad. It was also released on a red label, however this was not to Jeffrey's knowledge at the time.

Jeffrey explains that the reason why the record didn't fare well at the time was because of the difficulty in getting the song played on the radio. As he recalls, radio stations were much more likely to play 'radio versions' of songs which lasted for a couple of minutes, rather than five or seven minute 'extended' versions such as 'Star Child', which were more suitable to a club environment. In addition, as Jeffrey explains, radio airplay is a “political business”, and also within a short while band members such as Keith got their own breaks, and the Kallaloo era was over as quickly as it had started.

The music that makes you happy. We unearth forgotten musical gems for music lovers to enjoy once again.

Bandcamp Daily  your guide to the world of Bandcamp

Featuring Gary Bartz, 5 years of Rhythm Section Intl and an LP of the week by Nicolas Jaar